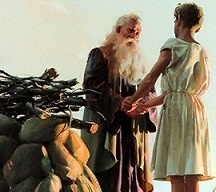 What does God Say about you?

God is all powerful and all knowledgeable. He is the only one that knows what we truly are, that is, what we can do or will do. The Psalmist knew this when he said in Psalm 103:14 “For he knoweth our frame” and Psalm 139:1, 2 “O LORD, thou hast searched me, and known me. Thou knowest my downsitting and mine uprising, thou understandest my thought afar off”
The story I want to relate here is about Abraham. God said something striking about Abraham. He said, “For I know him, that he will command his children and his household after him, and they shall keep the way of the LORD, to do justice and judgment; that the LORD may bring upon Abraham that which he hath spoken of him.“

What a testimony! Remember Abraham and his wife Sarah have been barren for such a long time and even as at the time God made this statement. That statement God made towards Abraham didn’t go unconfirmed as we see it practically been fulfilled. Abraham raised up a godly, God fearing, obedient and humble son – Isaac.

After God has blessed Abraham with a son, he tried Abraham’s faith and demanded that he should take his son – his only son whom he love so much to sacrifice to God as a burnt offering. Abraham obeyed without complaining and took the things necessary for the burnt offering including Isaac, but this was unknown to the young Isaac. I guess in one or more occasions, Isaac must have seen his father offer some sacrifices unto God and know what and what should be present, but this time, it’s like something was missing and Isaac asked, “My father: and he (Abraham) said, Here am I, my son. And he said, Behold the fire and the wood: but where is the lamb for a burnt offering?” What a big question. “And Abraham said, My son, God will provide himself a lamb for a burnt offering: so they went both of them together.” Isaac asked no further question but simply believed what his father have told him and followed still

“And they came to the place which God had told him of; and Abraham built an altar there, and laid the wood in order, and bound Isaac his son, and laid him on the altar upon the wood. And Abraham stretched forth his hand, and took the knife to slay his son” Genesis 22:9, 10

Now on getting there, Abraham built and prepared the altar and laid the woods in order, bound Isaac his son and laid him on the altar upon the wood. Note that Isaac was not a baby here, he was a ‘lad’ that is, a youth – a teenager and could know or tell that something is wrong and possibly break away from his father’s hand and run but he kept his hands to be bound without struggling. It means he agreed to be used as God’s burnt sacrifice if that’s the will of God. He didn’t fight his father, even when his father raised the knife to slay him, he didn’t shout but he remained calm.

Isaac had a gentle faith in God and in his father Abraham and never struggled to go against the will of God. He knew his father was a just and righteous man who loved and obeyed God in all circumstances and was rest assured that his father has not lose his senses – maybe due to old age, but is still serving the living God, and he was right. The attitude of Isaac points down to one thing which is the fact that Abraham didn’t fail in bringing up his son in the fear of God. He taught his son to obey, fear (reverence) and trust God at all times not just by his words but by his own life.

Isaac must have been watching his father – how humble and always ready without trying to compete with God to do God’s will all the time and have learn to do same coupled with his father’s tender love for him, cautions and teachings. The character and person of Isaac confirm the testimony God said about Abraham to be true. Indeed God knows us. Abraham was a success in raising up Isaac in the fear and ways of the Lord and this good upbringing also remained in Isaac’s later life when he became a man. He still maintain what he has learnt, he still live to obey God even when he is now independent of father or mother. Truly, the bible injunction is true “Train up a child in the way he should go: and when he is old, he will not depart from it.” – Proverbs 22:6

Abraham loved God and obeyed Him, he also transferred the same through teaching and an exemplary lifestyle to his son who learn to also trust, love, obey God and remain humble before Him

Does God know you? Can he give a good testimony about you concerning how you train your child? How will you raise your children? In the way of God or the way of the world? Godly children bring peace to their parents and in turn will be a blessing to their society at large, so raise godly and obedient children not just by your words but by your own lifestyle and example. You are their number one role model and your life and actions speaks to them louder than your words

Prayer: May God give us godly children