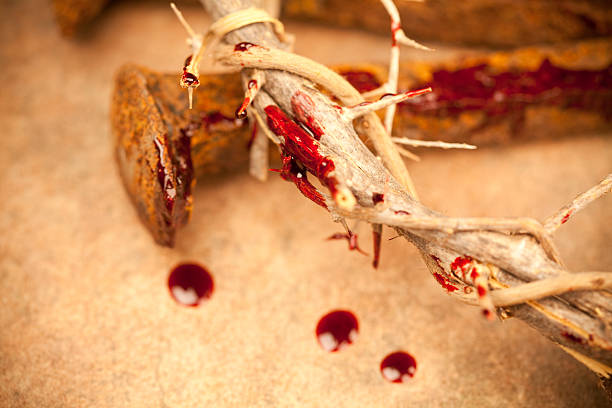 “Neither by the blood of goats and calves, but by his own blood he entered in once into the holy place, having obtained eternal redemption for us” – Hebrews 9:12

Today, we live in a world were discovery has been made that a man’s blood can match another man’s, and we have people that voluntarily give their blood for the survival of others. They donate their blood out of compassion to save someone at the point of death.

But nothing happens here on earth that is new. The Bible says, “thy will be done in earth, as it is in heaven.” So it is not counted strange today when you see people who are ready to give their blood so that others may live, because Christ himself gave his Blood for humanity that we all might be saved. Everything man has done or will do here on earth, is already known in Heaven.

Coming to the spiritual, today, that man in need of blood for survival is the true state and picture of the natural man. The natural man is overladen with sin and he is at the point of death – eternal death. Sin has taken a devastating hold on man since the fall at the Garden of Eden which made man sought different ways to be united back with God. The once sinless blood that flows in man became corrupted and placed man on his highway to eternal damnation. Now all men is in need of a pure Blood, a special one that is able to redeem and bring back life.


Since this was a general problem, “For all have sinned…” and no man can save his neighbour, not even his own child or household – man had no hope. Man began to make use of the blood of sinless animals to atone for their sins. Yet, even the blood of sinless animals wasn’t enough, because their sins were still called to remembrance every year with a guilty conscience (Hebrews 10:3, 4). But Christ came, the sinless Lamb with his pure blood and became the sacrifice for man’s sin. He died to make atonement for sin once for all. His blood became the perfect match for all men’s sin. Finally, here comes the remedy for sin – the Blood of Jesus Christ. He became our Blood Donor and donated his own blood to solve sin problem. Any man that receives this sacrifice of His is washed from the old defiled and corrupted blood that once run through his system and he’s made clean. Also, that man’s sin will not be called to remembrance anymore and there will be a clear conscience.

“For if the blood of bulls and of goats, and the ashes of an heifer sprinkling the unclean, sanctifieth to the purifying of the flesh: How much more shall the blood of Christ, who through the eternal Spirit offered himself without spot to God, purge your conscience from dead works to serve the living God?” – Hebrews 9:13, 14

Think about it, if the blood of another man can save his fellow man from the physical death, how much more shall the Blood of Jesus save all men from Spiritual death and separation from God? Just as a man will accept to receive another man’s blood by faith, believing the doctor’s advice, so also, if any man will receive the Blood of Jesus by faith into his life for cleansing, that man will be saved from eternal death. The Blood of Jesus Christ has solved all your problem, if only you will realise it and accept it

“For the life of the flesh is in the blood: and I have given it to you upon the altar to make an atonement for your souls: for it is blood that maketh an atonement for the soul.” – Leviticus 17:11